Disclaimer: subject matter may not appeal to all

The challenge – part 1 – it makes more sense if you read this first.

Sabrina stared at her phone, wondering if she should respond to the flood of incoming texts from Melanie, her friend who had hosted the party on the weekend.

But Sabrina hesitated. If she gets into a phone call with her best friend, she’s bound to get caught up in a lengthy conversation. Mel had a way of pulling things out of her that she wasn’t always ready to explore out loud. Sometimes her friend’s insistence made her feel flustered and overwhelmed.

Sabina scrolled around her phone a little more, procrastinating her inevitable response. She always ends up calling Mel back, it’s practically a given. Today, though, she’s a bit more hesitant than usual. Nick was on her mind, and had been ever since that conversation they had in the car after the party.

Absentmindedly, she decided to check her email app again. Still no message from Nick.

It’s Monday, she reminded herself. He’s at work, busy…

Sabrina started at her phone some more, wondering why the promised email never arrived on Sunday. They had talked late on Saturday night after Melanie’s party, and she understood that he was going to email her on Sunday.

Wouldn’t be the first time, Sabrina thought to herself, shaking her head at herself.

When it came to men, she’s always had trouble with communication.

She finally decided to call Mel back.

“I just wanna chat with you about Saturday,” Melanie said predictably. “What did you think? Did you have fun?”

Sabrina smiled. She knew her friend was fishing for details about Nick.

“It was a great party, Melanie,” Sabrina responded. “That was a good idea, to get us all together like that. And yes, I had fun.”

Melanie paused for a moment and then inquired about Nick. Just as Sabrina expected all along.

“I noticed you left with Nick,” she began and then waited for Sabrina to jump in with some details. “What is going on with the two of you, anyway?”

Sabrina rolled her eyes. Melanie was constantly trying to fix her up with men, especially since the separation. But Sabrina wasn’t really interested in pursuing casual dating like everyone was doing these days. She was afraid of the hook-up culture, and considered herself too old to deal with all the drama she keeps hearing about from people who use dating apps.

“We’re just friends,” Sabrina said, but she could feel across the phone line that this response didn’t satisfy her.

“Let’s have lunch,” Melanie suggested. “You free? Wanna meet at the sushi place?”

Sabrina pondered for a moment if she can push her current editing project aside for a bit and take a longer break for lunch. Working from home can be really isolating at times, and she counted herself lucky to have a friend who pressured her a little bit at times to get out of the house. Besides, she trusted Mel. They’ve been best friends for two decades and shared many ups and downs with each other over the years.

Maybe Mel is exactly the right distraction to talk to about Nick’s challenge, Sabrina pondered silently before confirming that yes, she will meet her at the sushi place in an hour.

The met at their favorite Japanese place, relaxing with green tea and a nice selection of sushi rolls. Melanie had pressed her about Nick almost from the moment she took her seat at the table, pestering her about details. Sabrina finally placated her after insisting that there wasn’t anything going on between them.

“But,” Sabrina finally admitted. “He did propose a challenge to me.”

Melanie stared at Sabrina when she dropped the word challenge, but remained silent.

Sabrina took a sip of her tea, leaned back into her chair, and took a deep breath.

“Do you remember how people were making fun of me for not relaxing at your place?” she began. “How they told me to take a load off, to stop taking care of things?”

“Exactly,” Sabrina responded. “This is what Nick said too, except, he’s only known me for a year, whereas you’ve known me for decades.”

Sabrina smiled at her friend. They rarely had arguments or disagreements, and when they did, they both felt discombobulated and…disconnected, somehow. She didn’t like it when Melanie wasn’t around to reach out to when things were difficult, and she knew that Mel felt the same way toward her.

“Anyway,” Sabrina continued. “We were talking in the car about how I’m always trying to control everything around me and at one point, he asked me directly why I can’t seem to relax. That’s how it began.”

Sabrina waited for a moment and watched Melanie’s expression. Her friend sat quietly opposite her and didn’t say anything, so Sabrina proceeded with her story.

“When we got to my place, he turned off the car so we could talk for a moment. That’s when he suggested he can help me learn how to give up control.”

“He wants to help me with my control issues,” she reiterated.

“Did you go in the house to talk?” Melanie wanted to know.

“No, that’s why the conversation didn’t get very far. Tim and Noah were inside, and I didn’t want to wake them up. You know Tim has those early mornings at his dad’s site…”

Sabrina stopped and looked carefully at Melanie. How far should she divulge Nick’s plan to her?

She suddenly felt hesitant, partly because she hadn’t even received this elusive email from Nick yet. The one where he would explain in more detail about constraining her, tying her up.

But the way Melanie’s eyes bored into her made her feel a little unbalanced. She suddenly felt like she might be betraying Nick if she divulged too many details, before he’s even had a chance to expand, or explain further.

Sabrina realized she felt a bit apprehensive about elaborating Nick’s plan. Should she tell Melanie about her suspicions about him? That Nick was implying he would like to introduce her to some kink? Is it really her place to tell Mel about that? Moreover, does she really want Mel’s input?

What if he changed his mind, she suddenly considered. Maybe she should just wait for Nick to reach out to her first.

After all, he hadn’t sent that email he promised and it’s been two days already.

She reached for her phone and gave it a quick swipe, to check for new incoming emails.

There were some, but they were all work related. None from Nick.

Sabina sighed quietly and tired to push her impatience aside. How is it that Nick can drop such an unusual idea on her and then disappear without a word for two days?

Why does this keep happening to her? How come she always attracts the men who don’t know how to communicate? Or don’t seem to want to?

Keenly aware that Melanie was watching her and waiting for details, Sabrina decided to abandon her plan to tell her everything Nick had said, but to give her just enough to satisfy her curiosity.

“I just checked if he sent the email he promised,” Sabrina told Melanie. “But it hasn’t come in yet. Basically, he said he wants to help me learn how to relax and let go of control, but we didn’t finish talking about the details. He said he would email…”

Sabrina trailed off, realizing she sounded repetitive, and took a final sip of her tea.

She didn’t want Melanie to see her disappointment.

“We should get going,” she told Melanie as a way to distract her. “I need to get back to work.”

Melanie stared at her in that way that implied she’s not completely satisfied, but didn’t push for more.

Sabrina knew she’d have to explain further, but for now, she felt better keeping Nick’s bondage plans under wrap. It’s not that Melanie was a prude, quite the opposite, she was much more liberated and experienced than Sabrina was, but that’s what she was afraid of. Melanie would just push her too far too fast about what it might mean and pester her about her feelings for Nick…

“I think Nick likes you,” Melanie said as she signaled for the waitress.

Sabrina rolled her eyes at her again and reminded her that Nick and her were just friends.

As they left the restaurant together, Sabrina felt her phone vibrate against her hip. She must have reacted slightly because Melanie gave her a strange look, as if she knew Sabrina was keeping something from her. But she didn’t press her to explain, and gave her a quick hug and smile before getting into her car and driving away with a wave.

Sabrina waited until Mel drove off, then sat in her own car and took her phone out. It bothered her that she anticipated Nick’s email so eagerly. Each time her phone buzzed, something inside her stirred.

I’m acting like a teenager, she chided herself silently but checked her phone anyway. Just in case Nick did finally follow through on his promise.

When Sabrina opened her email app, and saw a message from Nick.

Thank you for reading. I started this part on October 10 and added to it every so often. The next part is already underway.

Your discomfort does not inhibit my creativity. 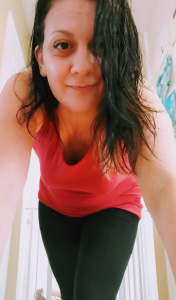