This post is a jumble of loosely connected points from the past weekend. In includes a Beagle puppy update (part 1), a Beach Day summary (part 2), and some remarks about COVID and protocol (part 3). And then I round up the whole post with a little rant. #SorryNotSorry

On the weekend my daughter finally got her puppy.

His name was Samson (given to him by the breeder) which we sort of liked, but not overwhelmingly so. A family member suggested we name him Chip, which the kids initially liked, but then didn’t. My son wanted Max; my daughter says everyone names their dog Max, so no. We went back to Samson, aka Sammy and continued to think up new names.

While visiting the kids’ aunt and uncle in Prince Edward County, my son suggested Tucker. We even consulted with the Shepherds, Patton and Winston. 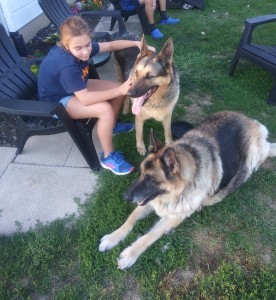 My daughter the dog whisperer.

They didn’t have an opinion either way.

We debated that Beagle name again at the beach on Saturday. They finally decided that most likely it’ll either stay Samson or go to Tucker.

On Sunday we drove an hour and 15 minutes in brutal heat (thank you for installing the compressor, Nelson, the a/c was much appreciated!) and picked up the 8 week old boy Beagle.

Omg they were all so cute! There were several siblings in the outdoor pen…

By the time we left with puppy, the name Tucker seemed to stick.

With us, not with the dog. Puppy isn’t reacting to his new name yet but it’s only been a day. I’m sure he’ll get used to it as we do call him by his name pretty much constantly.

So far things have gone well. Biggest learning curve is that he’s not yet housebroken. There are also numerous nightly trips to the backyard for a pee. Those are fun…

He’s very, very cute. I will create a youtube channel and post some videos at some point and let you know the link.

Saturday was Beach Day. I wore my new bikini.

My teen was tired so his sister tried to bury him in the sand.

And yes, my new bikini fit and I wore it without inhibition (well, sort of… 🙄 ).

I’m self-conscious but embracing my mom bod and all that so whatever. #BodyPositivity

Side note: Before you give me a lecture, I realize I’m not overweight, it’s not about that, it’s more of a psychological problem and related to self-esteem. I’m just saying I’m trying to get more comfortable with my self-image which is a mental health issue and has little to do with physical characteristics.

Point is, I never wore a bikini when I was young, but I always liked them, so I figured, if not now, when? which is why I blogged about it here. There you go. You may take it whichever way you want.

Besides, it was beyond hot and humid, and covering up or wearing a one-piece bathing suit would have been uncomfortable I think – what happened to normal summer weather? It feels like Texas up here in my part of Canada…😛

I should mention the COVID protocols briefly since many of us have seen pictures of packed beaches in places like Florida in the last few months. Here is what happened at Sandbanks Beach in Canada:

The car line-up was brutal. There were 3 entry points to the main gate where you purchase a day pass, which wasn’t manned by staff or police (although the cops showed up around 9:30 with the anticipation that the park will probably turn away beach goers by noon at the latest due to potential distancing issues).

Some covidiots weaved in and out of the car line-up and squeezed themselves in front of other cars who were patiently waiting their turn. Because most Canadians are polite, some of the cars let the covidiots in rather than face an altercation.

I was in the car with my kid and her aunt – the boys followed behind – and boy, did my daughter learn a few new words from her aunt when that shit happened. 😂

(We can all swear like truckers, and my tween later said that technically she was already familiar with that vocabulary, so no real harm done.)

But it needs to be said that mostly, every beach-goer behaved themselves. Once we got into the beach and set up our shade and cooler, we looked around for potential covidiocy.

Every family/friend-unit stayed within their bubble. No one caused trouble. Most people didn’t wear masks (not required outside and where distancing is possible) but everyone was at least 2 meters apart from strangers. And the water was warm enough to swim in which for me especially is key; I dislike cold water and wasn’t sure what to expect of this part of Lake Ontario.

So, all in all, it was a nice outing and such a mental health boost after months of same old walls and routine.

Today, I’m at my wits end again. The novelty of watching puppy has already worn off a little with certain family members and just in time, the tap in the kitchen sink is down to a trickle (which he said he’d get a plumber to look at back in July…) and then, like magic, the effen Samsung fridge started making the noise again (don’t even get me started on that, either, but never ever buy Samsung appliances and if you do, don’t cry to me when this crap happens) so I had to defrost the giant fridge and all my food is in coolers or the garage fridge.

It’s 40 freaking degrees outside (Celsius). This is not a good time to store food in coolers. I went shopping JUST YESTERDAY…

I’m over it. All of it. They can have this house and the contents and I’ll go find myself a little condo that is completely empty and decompress there (and write all my books in peace).

A girl can dream, right? Blah.

So that’s what I’m doing today. I started this post yesterday and I’m just now getting a few minutes, surrounded by clutter from the fridge, to tap out my drivel. The puppy is napping in his crate at the moment, the kids are MIA (aren’t they always) and one is about to leave for a trip to a cottage. The man here who is supposed to deal with a plumber appointment went to a car appointment (I don’t know what’s going on there now…) and tomorrow the fridge guy is coming which will be even more fun (for me) (not). Especially because my partner has a flight tomorrow leaving me with a teenager who will have to get his ass out of bed to sit the dog while I deal with the appliance guy.

But hey? I had a nice weekend. And the puppy is cute.

Happy Tuesday! I hope you enjoyed this very long Slice of Life story. See you in the comments.