As stated in part 1 and part 2, we visited the city of Lugano in the southern part of Ticino in Switzerland. When we completed the boat tour, we walked around the town area a little, visited the expensive hoity-toity shops where the rich and famous do their thing, and ultimately discovered a couple of nice churches, one of which was near the train station at the end of our day.

Here are a few impressions: 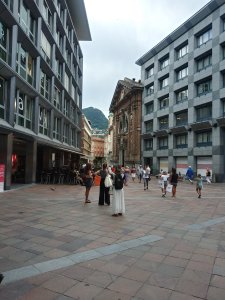 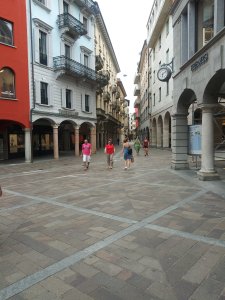 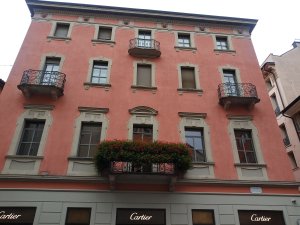 Here’s an interesting side note: where I grew up was near the city of Zurich, which is in the German speaking part of Switzerland. The laid back Italians in the south sometimes assume the northern Swiss Germans are a little bit stuck up. This is true for some, but not for all of them, but to illustrate the mentality, here’s a little story my aunt told me:

There was some guy who bought a restaurant when the original owner retired in my childhood town near Zurich. He renovated the place and painted the outside stucco a bright yellow. I believe the cuisine was Mediterranean inspired which would make sense in terms of colour…down here in the south of Switzerland, close to Italy, all the buildings are painted in a variety of colours. It adds to the ambience of the place.

Well the neighbours who leaved near the newly painted yellow restaurant were outraged. They got together and complained and stated that such a colour simply does not match the surroundings. Being a democracy, the region voted, and the complainers won the case and the guy had to re-paint his restaurant a more neutral colour. 🙂

As we were walking along the downtown part of Lugano we came across the high-end stores. Interestingly enough, the buildings kind of lost their colours here…

The evening progressed nicely, and although everyone was tired (especially the kids) we still continued on and took in the sights.