A few weeks ago I wrote a post about parenting. Then, I read and re-read it many times, editing and tweaking it, until I felt comfortable sharing this information with you.

I finally published the post, and the very next day…

I failed at parenting.

So now, I have a new post in my draft folder talking about that experience, which I may or may not publish. Bottom line?

I may or may not post that story of my failings for your reading pleasure.

My never-gets-sick kid was on the couch, sick, yesterday. She makes it all the way to double digits never missing a day of school or activity and boom – sick practically every second month during age 10.

WHAT IS GOING ON?

She was all worried about missing track and field tryouts that morning at 7:50 am. She could barely stand upright and worried about running.

I told her: parents can email teachers who coach track and field teams that their kid wants to be on the team again this year but is sick to try out today.

I’m sure they’ll save her a spot. She was one of the top performers last year, they won’t forget about her this year, I’m sure of it. Or, maybe she had a 24 hour thing…

This coming weekend is also the final regional ringette tournament. She is playing three games against very tough teams. She is needed for game integrity – they rely on her swift skating skills to whip around and steal the ring from the opponents and then either score or assist on a goal. “Small but mighty” the head coach calls her.

There are weekend long festivities planned at this tournament and my girl-child, aka social butterfly, would hate to miss out on all this fun because of yet another illness that won’t leave her body.

(Note to add: Wednesday morning she left for track tryout. 🙂 )

My health focus is continuing. Lunch was a challenge on Tuesday. I was hungry before I left for the grocery store despite a hearty, protein-rich breakfast, and the long line-ups didn’t help. I stood there waiting my turn and stared at all the food I could be eating. Sigh.

When I got home I had to prepare food first, in order to stay on this health kick. I made soup but had no protein to put in it, and since the sick girl-child refused to eat anyway, I thought a broth-y type soup is just fine. While cooking the soup I snacked on chickpeas. I had some sitting there on the counter I meant to put into a salad, but I couldn’t help myself, I just ate them like I would a bowl of chips or nuts.

After a while, I surveyed the mess on my kitchen island. On a whim, I chopped up a little bit of the fresh chard still sitting on the cutting board and added it to the bowl of chickpeas. There was a little bit of ham left from earlier, cut into cubes. In it went. A few stray onion slices from the soup making also went into the chickpeas, and I drizzled the entire thing with some artisan olive oil my mom gifted to me, flavoured with hot peppers and spices.

I ate that. Was surprisingly filling!

But not filling enough.

Because of course it isn’t filling. People, namely women, who diet always want to eat more.

Lucky for me the sick child wanted a little bit of yogurt.

Yogurt in any form other than full fat should be illegal to sell. I say this because I believe Michael Pollan who said something to the effect that the sweet, flavoured yogurts they invented for convenience under the ruse of it being healthy is right – yogurt used to be such an important staple in years gone by, full of probiotics and full fat deliciousness. Then, in the 80s, we went on this non-fat kick and yogurt became…dessert. Sugar, artificial enhancers, fat-free. Not exactly healthy.

We never buy the flavoured, non-fat yogurts. Read the labels to see what they fill it with when they remove the fat out of it. Or how much sugar is in the so-called fruit. Or the enhancers, artificial flavours and colours…Not my thing.

I used a balkan style, plain, full fat yogurt, and made the sick girl a little bowl. For myself, I made a huge bowl and filled it to the brim with sunflower seeds, pumpkin seeds, hazelnuts, and frozen blueberries. Then I sprinkled some unsweetened shredded coconut on top, along with some flax, and ate that.

The reason I was able to type this entire blog post is because I was no longer hungry. Surprise! I felt full and satiated. My yogurt did the trick. Bonus – no sugar! No carbs either!

Now how to stay away from the Easter chocolate…

As for the rest of the day, my eating had to be strictly monitored. I was in an unexplained not great but not exactly bad mood and when that happens, it is preferable that I stay away from the kitchen.

If only the rest of the groceries would put themselves away…

Now if you’ll excuse me, I’m going to go back to re-read my parenting fail post to see if I should delete it, ignore it, or post it. 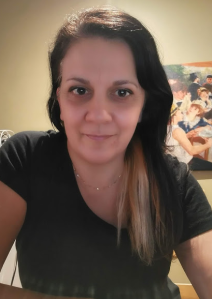