So we’re dog sitting this week.

He’s an Airedale Terrier and 9 month old, which translates roughly into “there will be mischief”. He’s basically a tween-aged dog, with all the trimmings! Lucky for us, his family is all about training (Jerry knows and follows almost all commands almost all of the time), is well socialized (thanks to puppy training classes) and lives in a family dynamic similar to ours (two adults, two kids similar aged as ours), with a similar household set up (mom stays home and works from home, dad and kids leave during the day).

He adjusted very well to us immediately, and the crying or pining was almost non-existent.

We’re having fun with him! He’s pretty good if you can get past the mauling whenever you come in the door. Doesn’t matter if you went out for a shopping trip or down the end of the driveway, when you return he mauls you (happily, you understand, and with lots of slobber). Such excitement when someone comes home! He can barely contain himself….We’re used to it now, and exaggerate our reaction so that he thinks he hurt us, which makes him stop with the mouthing.  Immediately after he stops mouthing us, he simply grabs the closest soft thing he can get his teeth into: a child’s slipper, a scarf, a shoe, a dish towel or a tissue from a kleenex box left within his reach accidentally. Soft things are his favorite and when he’s overjoyed, that’s what he wants in his mouth.

No wonder the first night with us he puked up a washcloth.

He’s also figured out where I keep the dish sponge and steals it at every opportunity. The command to get it back is “switch” while taunting him with a liver treat, and that works pretty well. But still…if the sponge is within his reach, he takes it.

(Oh, buddy, I think to myself. You know you’re not in charge around here…)

Certainly it’s been much more active in the household since Jerry arrived.

Going to the bathroom requires gymnastic maneuvers to keep him from butting his face into that room at the same time. His goal is to steal the toilet paper, or to stick his head in the garbage and grab whatever soft tissue paper is in there. To solve this problem we placed the garbage into the bathtub, but he still finds a way to get at the toilet paper.

Mine, the look on his face tells us.

Nope, it’s not, I say, wagging my finger at him. He thinks that’s an invitation to play and once again, the liver treat comes out.

(In the meantime, we either leave the toilet paper on a shelf, or sneak into the bathroom when he’s distracted elsewhere…)

The best part of dog sitting is that we don’t have to do it all the time. Being a hockey family we spend a lot of time at various rinks, which are not exactly dog friendly places. I’d feel bad for the neglect a dog would experience with our endless running around, especially on weekends when the entire family is home together (and, inadvertently, getting ready to leave to go to one of several rinks each weekend day). We’ve held off getting another dog after our Rusty died years ago, for that main reason. Instead, when people ask us to sit their dogs, we say yes and we love it. We get to have a part-time pet which teaches the kids all about dog life, and its responsibility associated with such a high maintenance pet, and it relieves us of the financial commitment of caring for said pet. No vet bills for us, the food and toys are provided by the owners, and all we have to do is ensure the dog doesn’t choke on washcloths. (Where DID he get that from, anyway?)

And such a difference from Molly, the little Schnoodle terrier we look after at least once a month, sometimes more. Poor Molly saw me walking Jerry on Friday and she gave me a very dirty look. Who’s that and why do YOU have to take THAT for a walk? she probably wondered. She’s older, and no fan of puppies, so we haven’t tried to get together with her. Jerry would want to play the way puppies play and Molly….well, she’s beyond that now. It’s probably a good thing my 9yo wasn’t with me then, Molly considers my daughter her BFF…I can only imagine the jealousy she would feel if she saw Sonja interact with Jerry.

Doggy drama. Such a difference from the usual other drama!

I lost my ball. Where is my ball? My ball is in there. Why can’t I get my ball?

Now where is my ball? I thought it was here? Where is it? (Notice the bench turned the wrong way, and the shoe basket on top. It appears Jerry likes to chew baskets, and the drawers in the bench are made of basket material…) 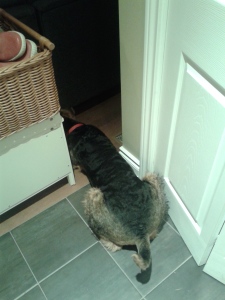 That dog is swimming. Those waves make noise…isn’t he scared? Better sit here with my girl. 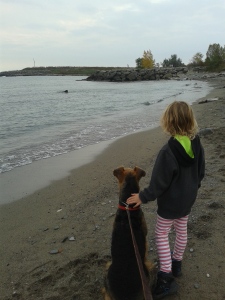 Mmm…tasty things go into this contraption.

Now why do I have to sit in this penalty box when all I did was lick the sharp tasty knife in the contraption? 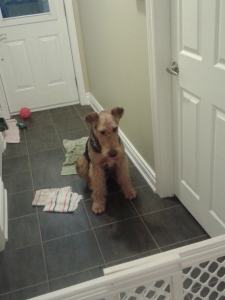 Alright, I forgive her, but she better come rub my belly.

What? You’re making lunches for the kids, and I get nothing? That’s the reason I’m sitting here…and I’m not moving. 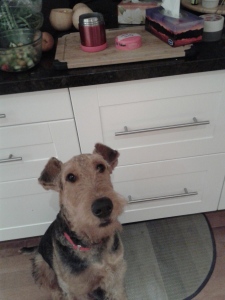 One thought on “Dog sitting adventures (with pictures)”